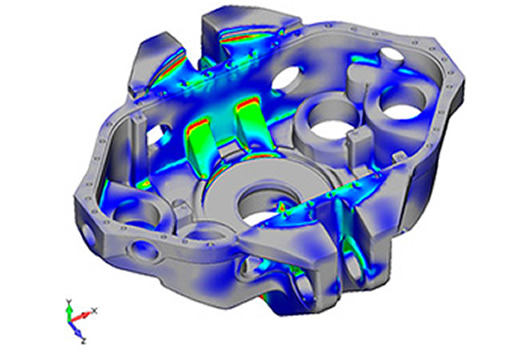 A series of complex engineering analyses was recently completed for Pacific Rim Engineering Products (PREP). What was really unique about this work was the scale and the scope of the project – a complete top drill package that could handle a string weight of more than 2,000,000 lbf or 1,000 short tons.

The drilling package engineering and manufactured by PREP consists of a draworks and the top drive unit. The photos really say it all. Predictive’s role was to supply the engineering consulting analysis work to PREP.

Analysis models covered the spectrum of finite element techniques from 1,000,000+ node tetrahedral models (the top drive casting) to a very clever plate model of the draworks frame assembly. Both models presented significant challenges and represent dozens of design changes to arrive at the final “approved” design. We are particularly proud of the draworks model. To get the load path correctly modeled, FE approximations were created of the cable drum and the gearbox structures and integrated into the draworks model. The complete assembly only had 112k nodes and even with a nonlinear contact mechanism between the drum brakes and the frame, would run in a few minutes. This type of numerically efficient and accurate FE modeling allows us to make numerous design changes – almost on the fly.

Along with these core models of the top drive gearbox and the draworks, additional models were built of just the cable drum and the gearbox to optimize their structural performance.

At the end of the project, we all breathed a sign of relief when DNV certified the complete package in the first go around with no problems. 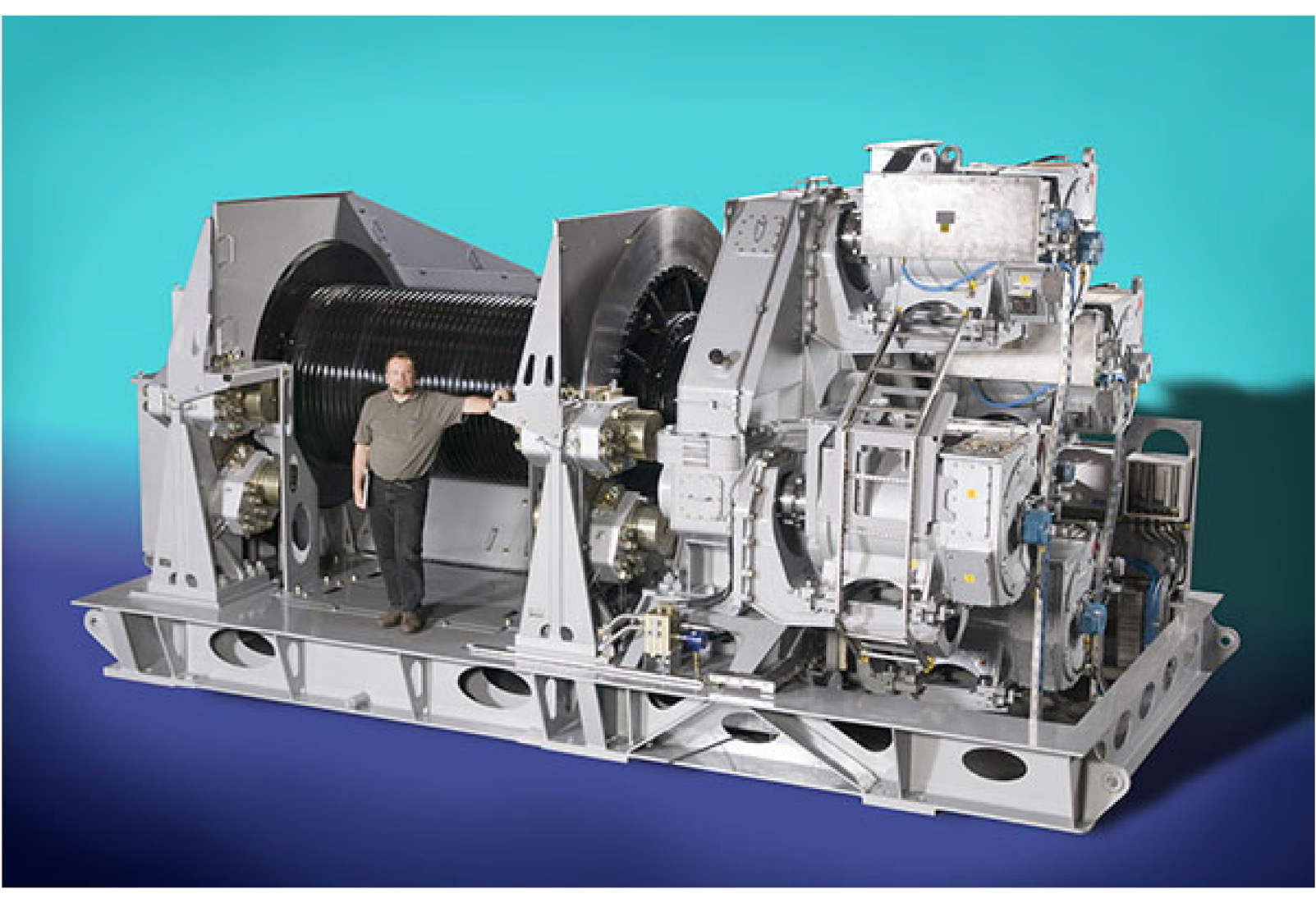 The complete machine was stress and fatigue analyzed using the finite element method.  Optimization of the structured allowed the client to reduce weight while increasing the strength of certain fatigue prone components.  The winch drum was extensively analyzed using a hydrodynamic formulation of wire pressure to drum load. 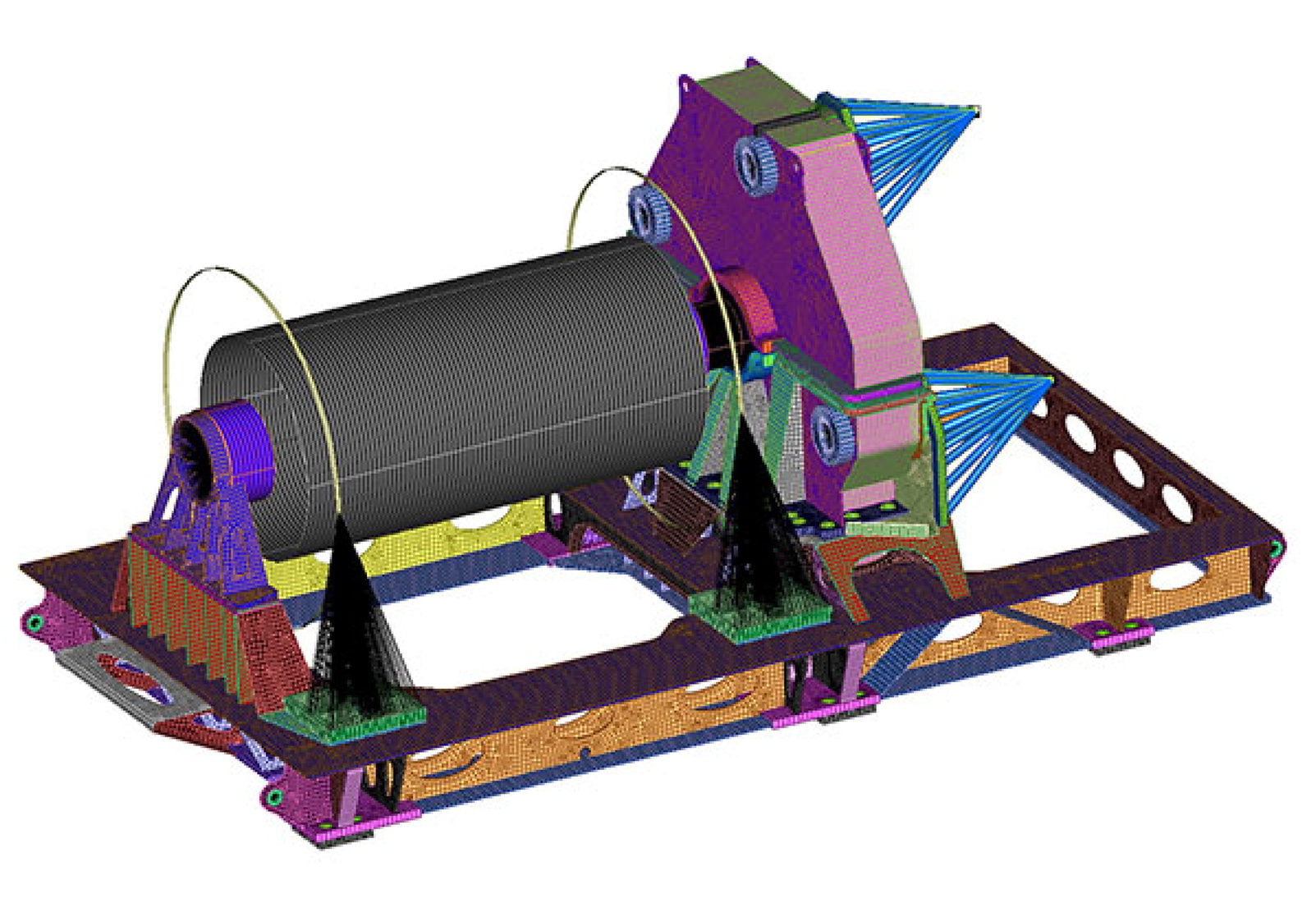 Figure 3: FEA model of high-speed winch for the oil patch 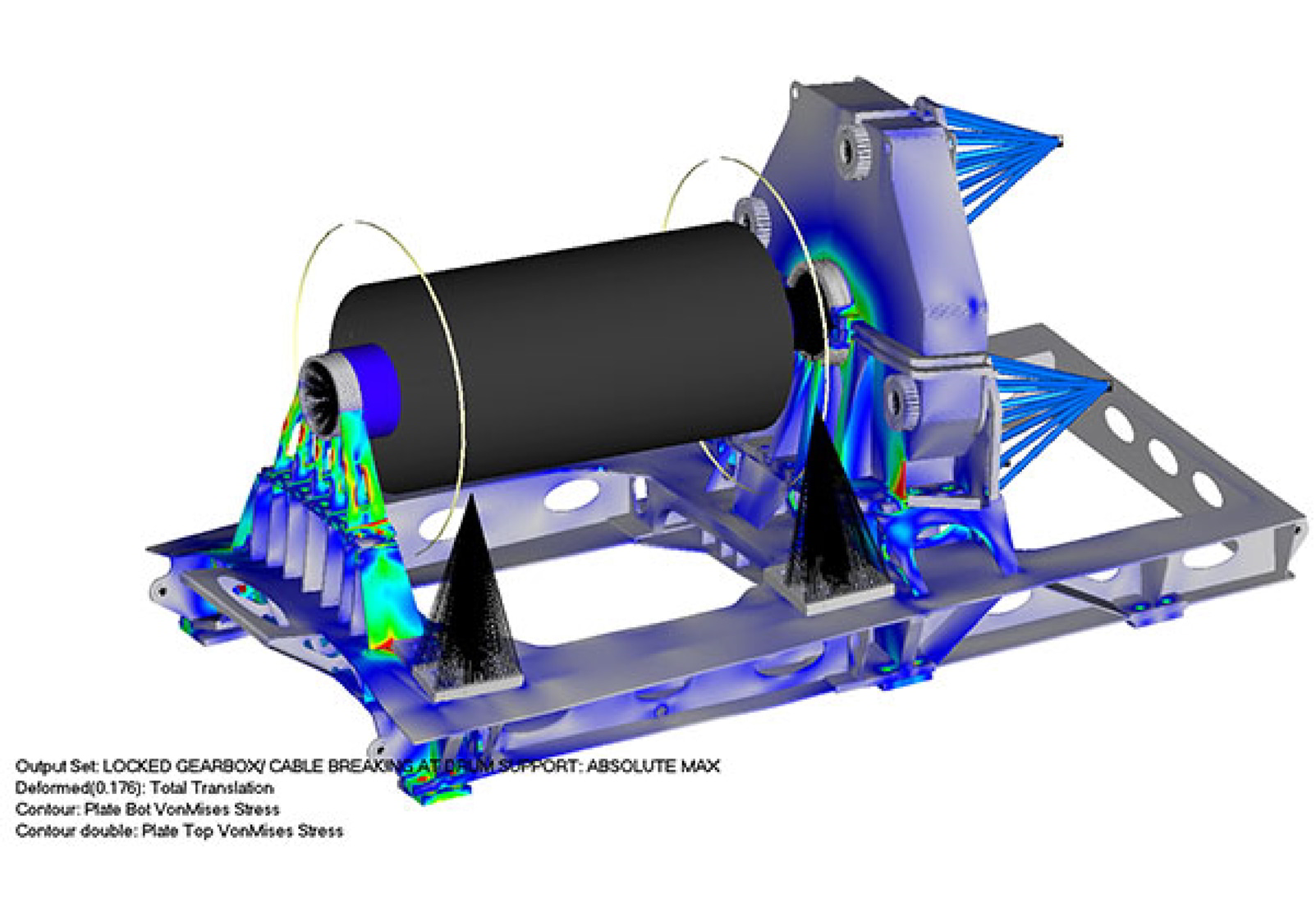 This model had a complex load case that involved cable breakage and full-brake stop.  The frame was optimized for stiffness and weight since it was a lightweight design. 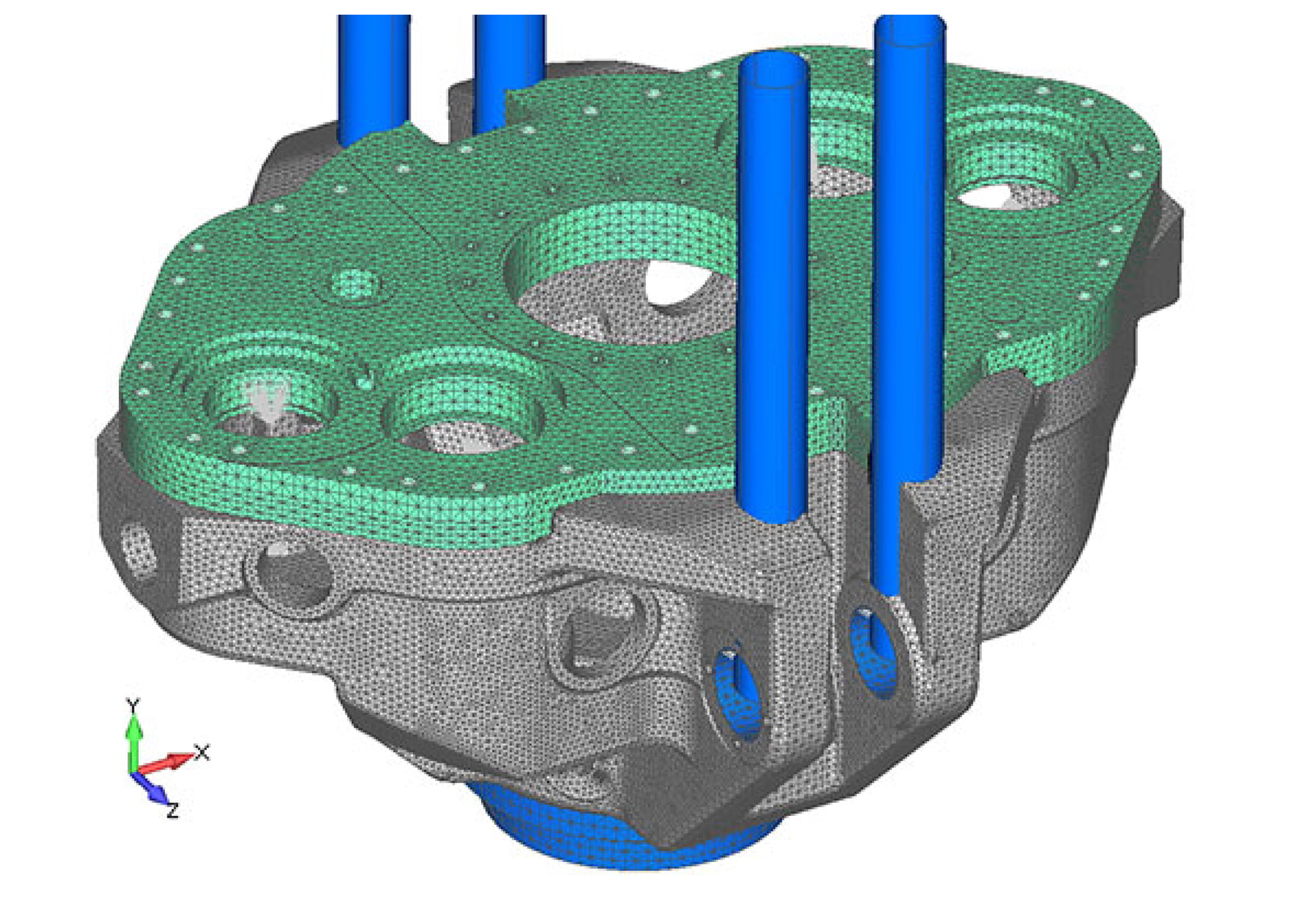 This model was over 2,000,000 nodes and used bolt preload to set the lid onto the main casting.  Load cases involved gear loads along with the pipe load of 1,000 short tons.  The model was vetted for stress and fatigue.  Final results were validated against experimental data and was shown to pass with margin. 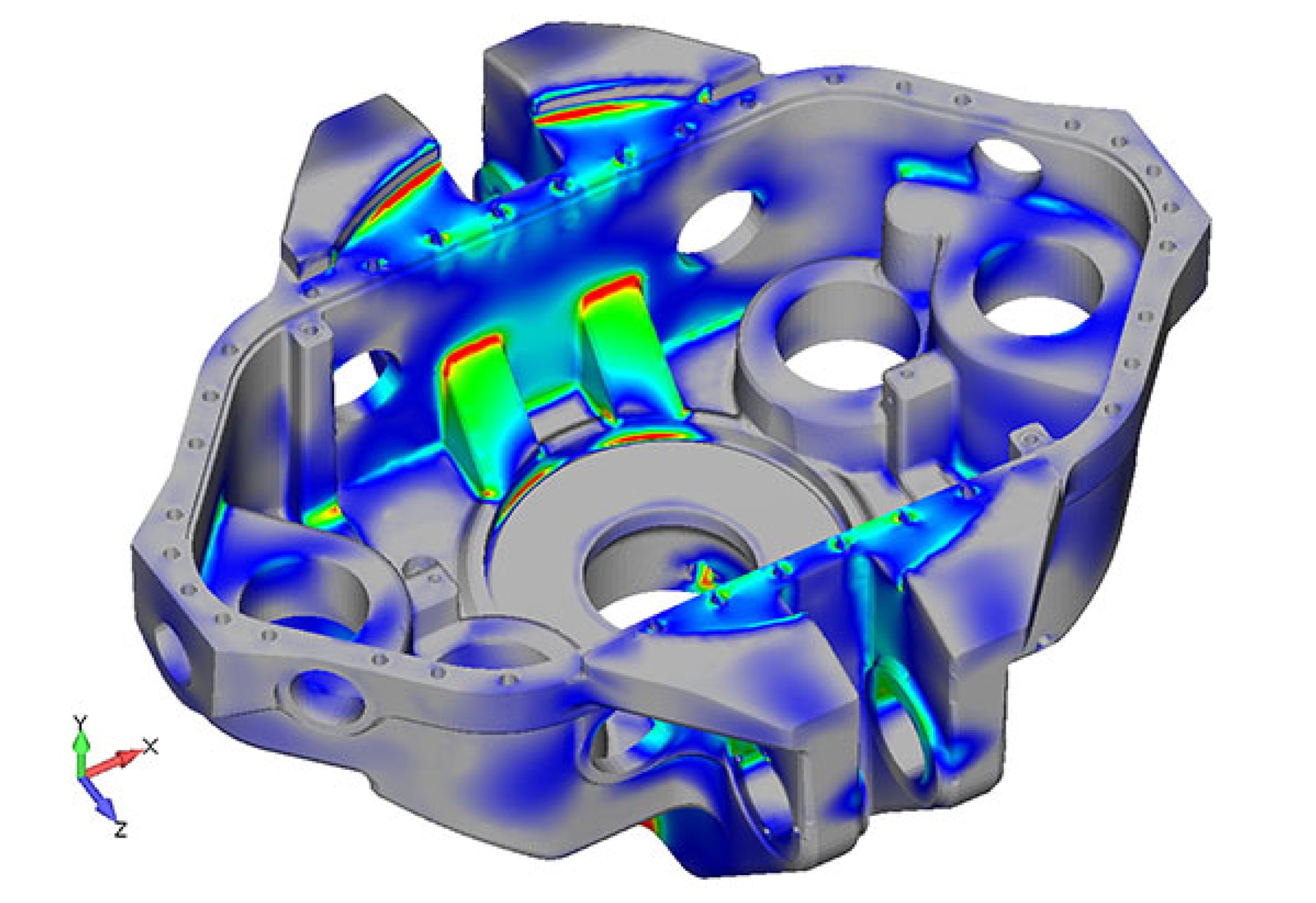