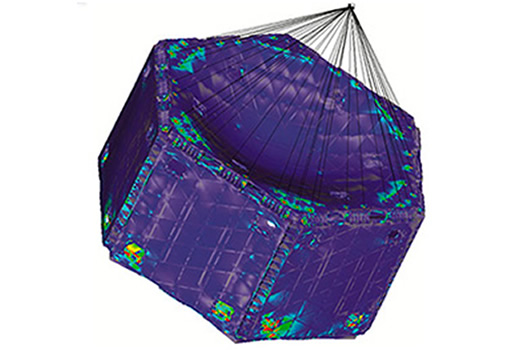 Development of the next-generation of satellite structures for the U.S. Air Force Research Laboratory (AFRL). The system features a modular framework of panels that use a shared electrical and communication bus that can be quickly assembled into a fully functional and ready to launch satellite in a matter of days.

Revolutionary Satellite Solution Features Modular Design
SpaceWorks provides unique and advanced satellite solutions. One of the company's current projects involves the development of the next-generation of satellite structures for the U.S. Air Force Research Laboratory (AFRL). The system, appropriately named "Plug-and-Play Satellite" (PnPSat), features a modular framework of panels that use a shared electrical and communication bus that can be quickly assembled into a fully functional and ready to launch satellite in a matter of days.

Depending upon the mission of the satellite, any number of "off-the-shelf" spacecraft component modules can be plugged into the panels, making the satellite ready for immediate launch. This approach represents a revolutionary leap forward. Typically, months and usually years are required to create a dedicated satellite. Conversely, the PnPSat system provides a turnaround time of just days for the right missions. A key factor in the utility of the PnP satellite is its lightweight and rigid structural framework that facilitates the easy placement of spacecraft component modules, e.g., batteries and telescopic imagers. To allow commonality of usage, the framework is designed to launch the lightest combination of modules in any desired grouping. Determining the appropriate combination was not an easy process and required the extensive use of engineering optimization using finite element analysis (FEA). To expedite this process, Predictive Engineering was hired as SpaceWorks' FEA consulting specialist. "We chose Predictive Engineering due to the company's unique blend of high-end analysis resources and ability to easily work within our engineering team in meeting our schedules and budget," says Jeff Preble, president, SpaceWorks. Using Femap with NX Nastran technology from Siemens PLM Software, Predictive Engineering built a series of elegant but complex FE models that allowed SpaceWorks to quickly gain insights into the structural performance of this novel spacecraft structure.Within weeks, SpaceWorks was able to verify its new design and win accolades from its main client, the U.S. Air Force Research Laboratory.

Leveraging Advanced Analysis
The PnP satellite structure is composed of eight panels that are bolted together. Each panel is made up of two symmetric halves. The panel has thick ribs to provide structural reinforcement with a thin outer skin. If a standard designer approach would have been used to simply mesh the geometry with 10-node tetrahedrals, the resultant FE model would have been in the range of tens of millions of nodes and would have been unsolvable.

Predictive Engineering determined that the only practical approach was to mesh the thin skin using plate elements and the thicker ribs with 8-node bricks. Using the advanced meshing techniques in Femap, a completely mapped mesh (bricks and plates) of the PnPSat structure with a node count of approximately 800,000 was produced. Although large by most analysis standards, the FEA results for the structure's normal modes were found to be within five percent of experimental results. "We knew we were pushing the technology of both Femap and NX Nastran with this model and such tight correlation just confirmed to us that we were on the right track," says George Laird, principal mechanical engineer, Predictive Engineering. "To see such a good correlation on a very complex system model was impressive."

In addition, solution times were in the range of minutes using a standard 64-bit PC computational platform.Without the advanced meshing tools within Femap – creating matched grids of 8-node bricks and 4-node quads – it would have been impossible to achieve the simulation accuracy required by SpaceWorks. "We knew that we had the right engineering analysis team on board when we saw that not only the model was accurate but we could generate optimization runs in minutes," says Preble.

Strong Competitive Position Bolstered
SpaceWorks' development of the PnPSat structural system demonstrates its ability to rapidly respond with innovative solutions to highly complex engineering requirements. Preble points out, "Creating advanced models that are both accurate and fast definitely gives us a competitive edge and has become a critically important contribution on these fast-paced, technically challenging spacecraft projects."

Analysis Tools and Procedures
The Femap model was constructed based on a detailed SolidWorks CAD model. The finite element analysis software was NX Nastran. The model was run through a series of linear static analyses followed by a normal mode analysis. At the end of the program the model was subjected to a Power Spectral Density (PSD) analysis using a standard PSD excitation from 20 to 2,000 Hz that simulated launch conditions. 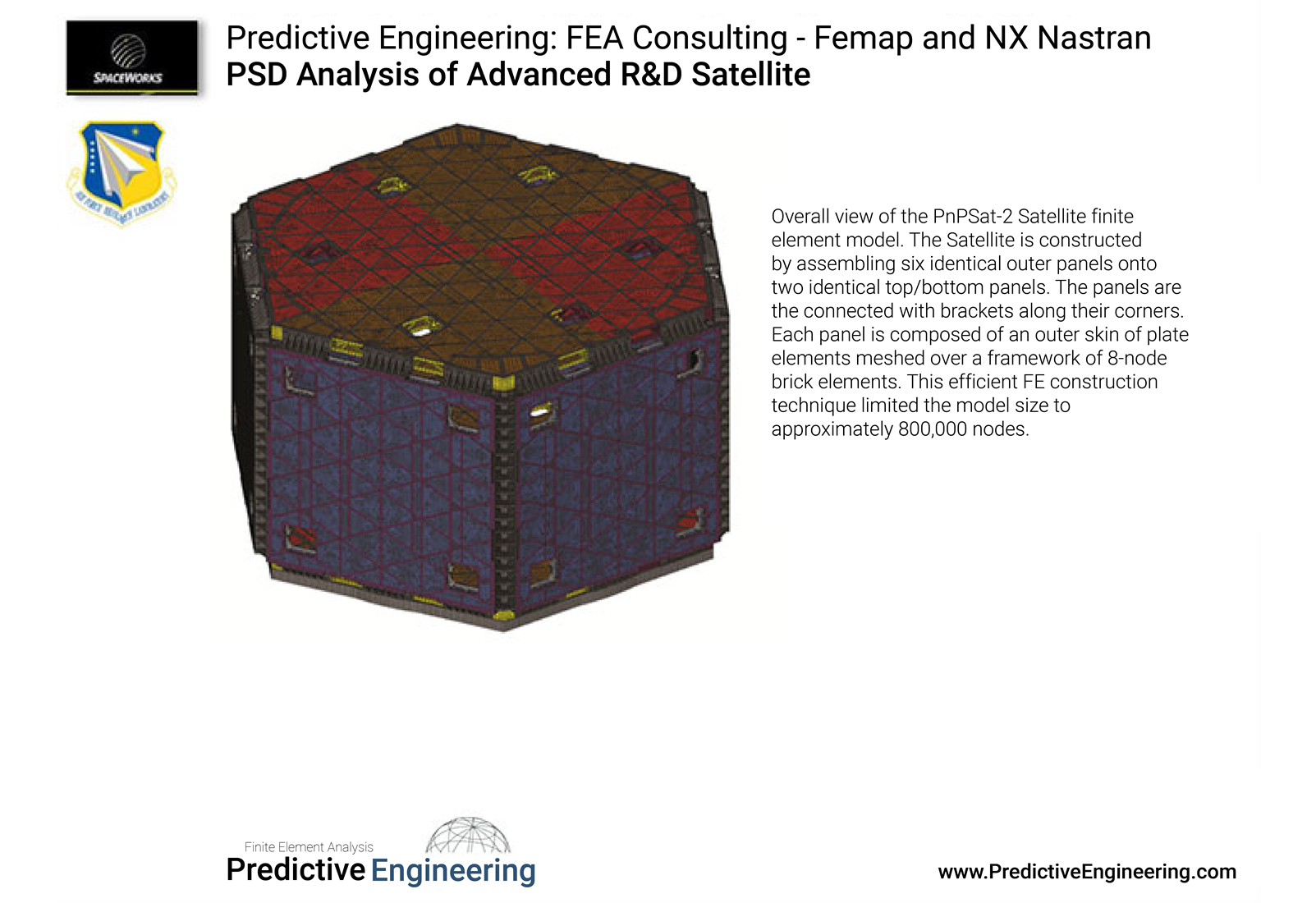 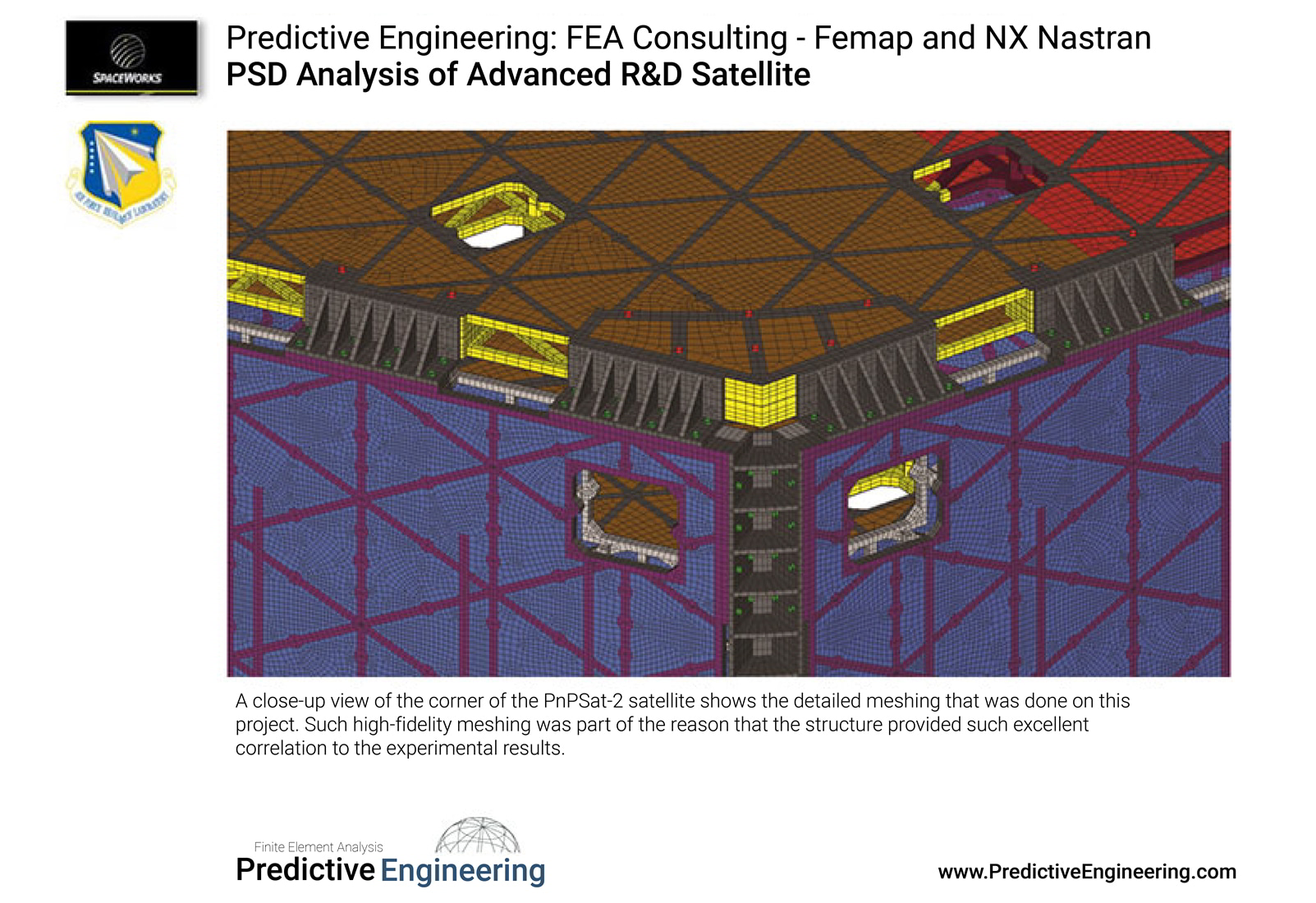 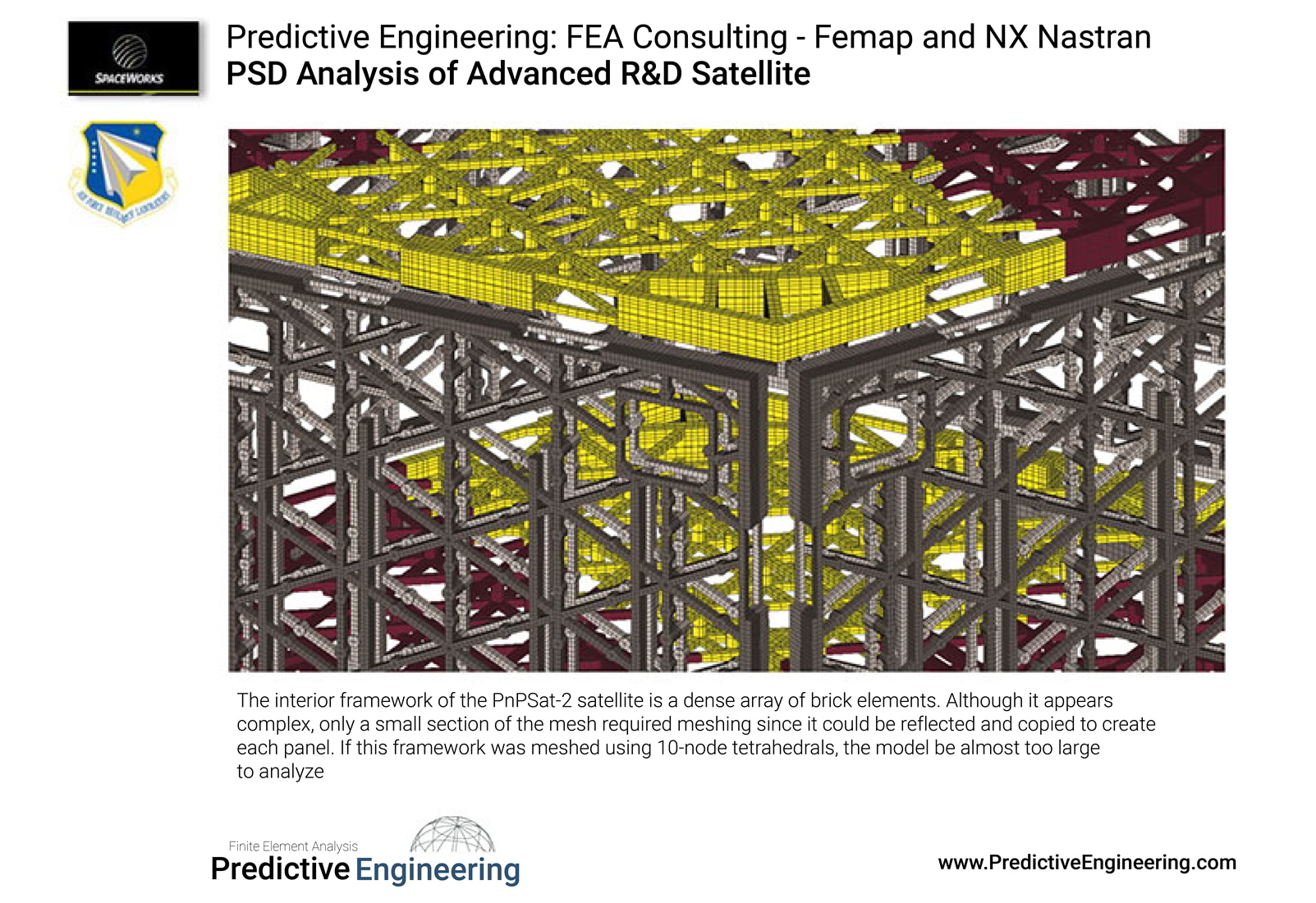 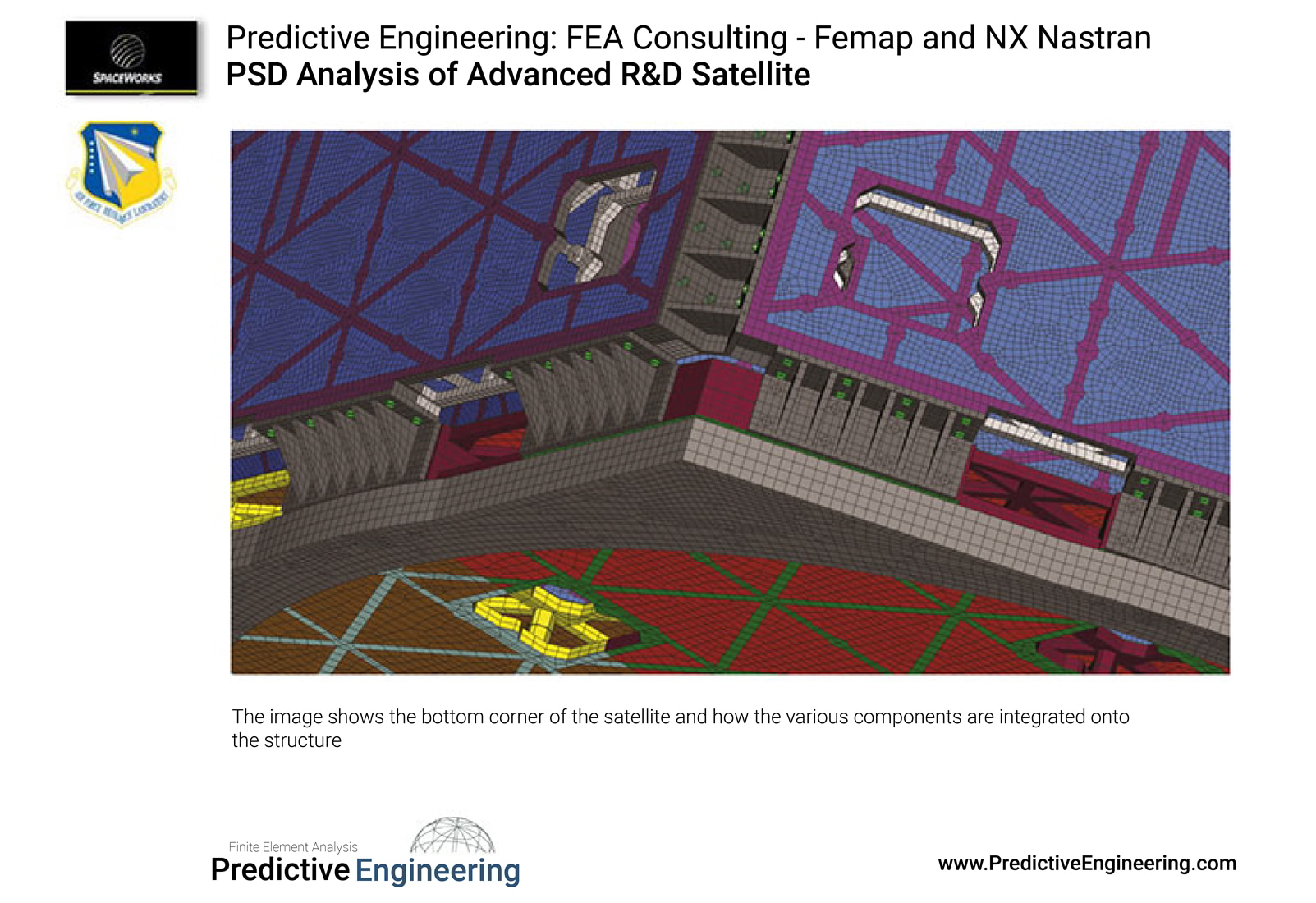 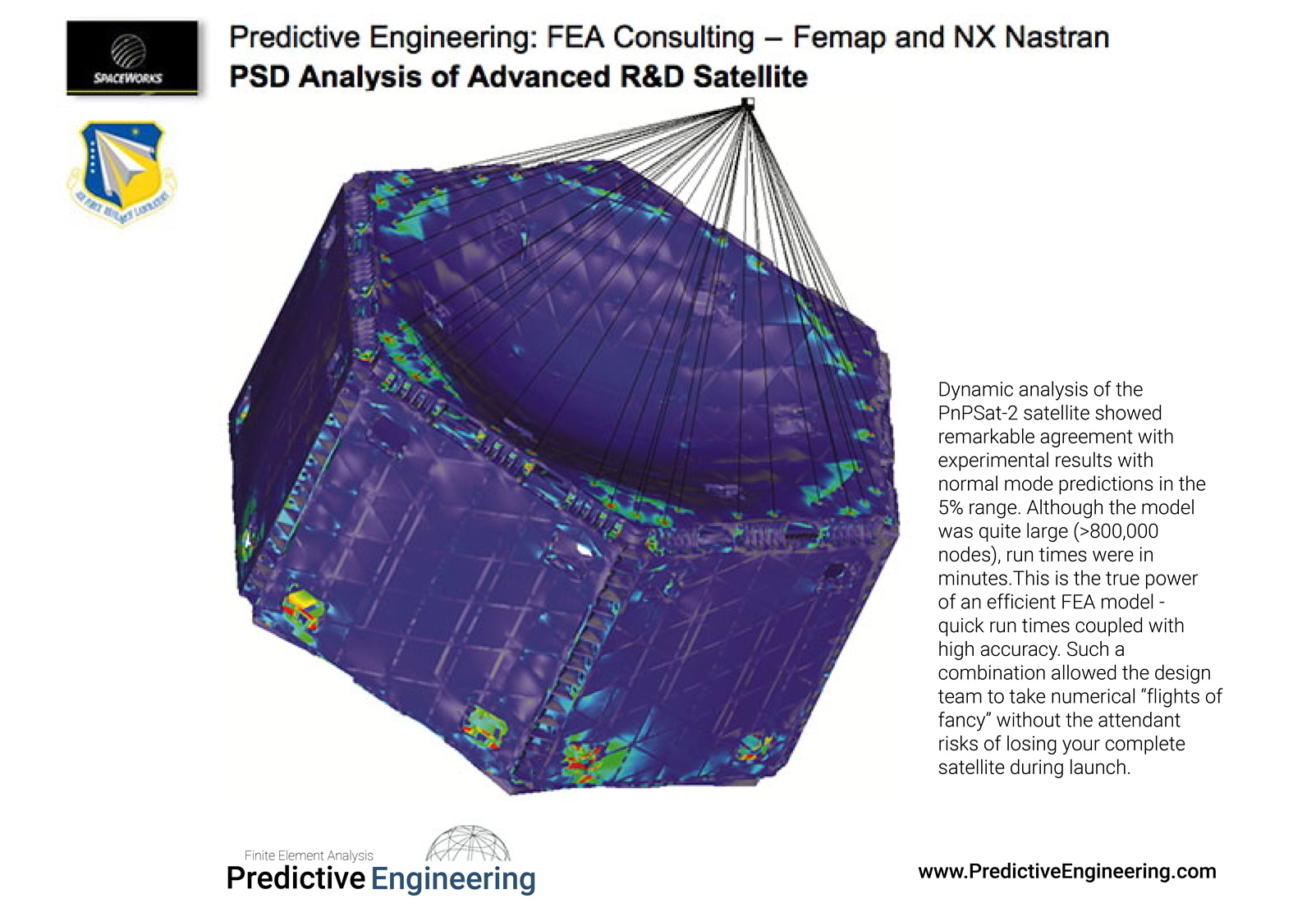 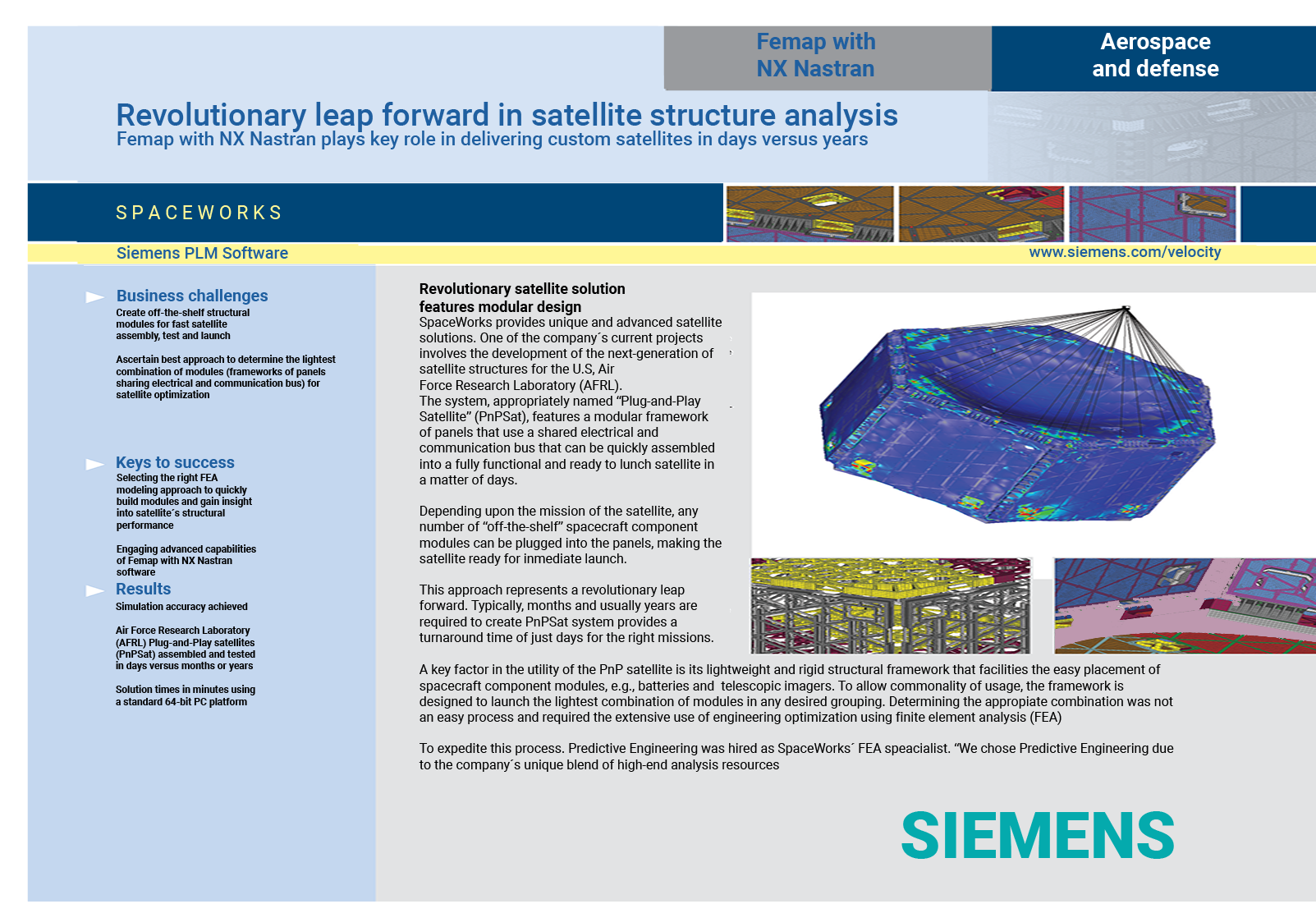 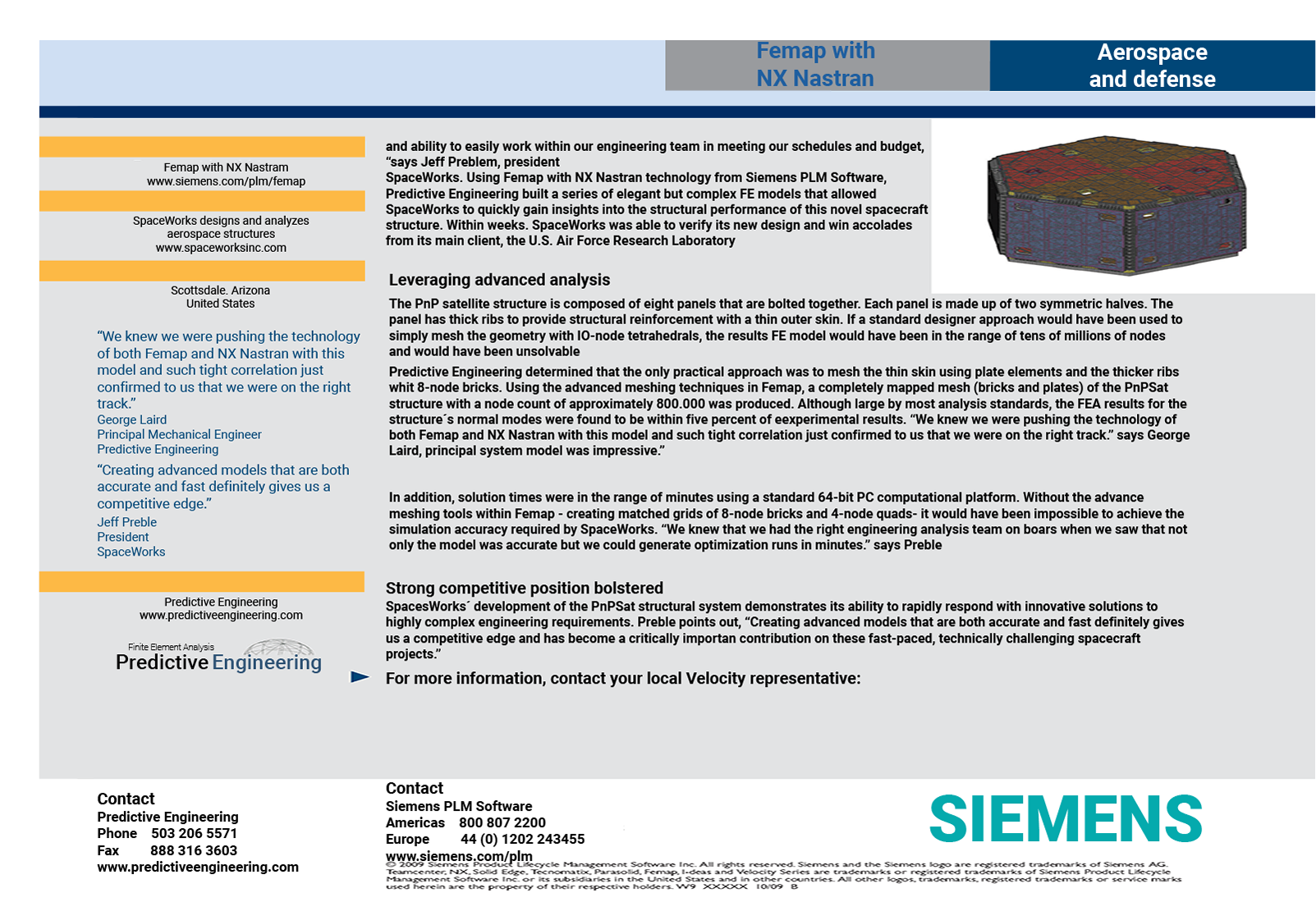