Static and Seismic Analysis of a Pole Mounted Electronics Enclosure 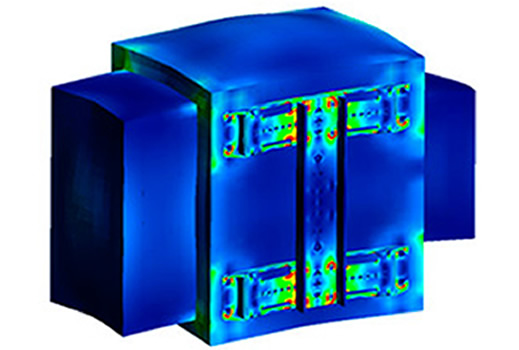 Design and analyze a sheet metal bracket system that will support a pole mounted electronics enclosure.

Modeling Assumptions and Details: The finite element analysis (FEA) model was constructed based on geometry provided by client. The structure was idealized into a plate FEA model with the bolted connections modeled using beam elements for the bolts and rigid links for their connections onto the plate elements.

The purpose of this model was to predict the stresses in the bracket system. The enclosure was only included into the model to provide the correct load application into the bracket model.

The material used for the brackets was A36 with a nominal yield strength of 36,000 psi. The enclosure was modeled as aluminum.

The brackets were evaluated under the Telecordia GR-63-Core seismic specification (prior specification was Bellcore GR-63-Core) for NEBS Requirements under Zone 4 seismic response. The GR-63 is part of the larger Telecordia specification GR-487. The other major load case used the UL60950-1 Section 4.2.10 specification that required that the brackets support three times the weight of the enclosure. Wind loads were not considered on this cabinet.

The GR-63-Core seismic analysis was performed using the response spectrum analysis method with the Zone 4 response curve. The response curve was applied in all three orthogonal directions to determine which direction created the most severe response. The bracket design was then quickly modified to meet the allowable stress targets. The final certification load required that all three directions be summed via the SRSS method.

The static load case developed only minimal stresses in the structure. This was simply due to the fact that the Zone 4 seismic response is more or less at a level of 5 g.

Note: This analysis work was also discussed in a white paper title "Linear Dynamics for Everyone" published in Desktop Engineering.

Summary: The sheet metal bracket was put into production and is has been successful implemented by the client. 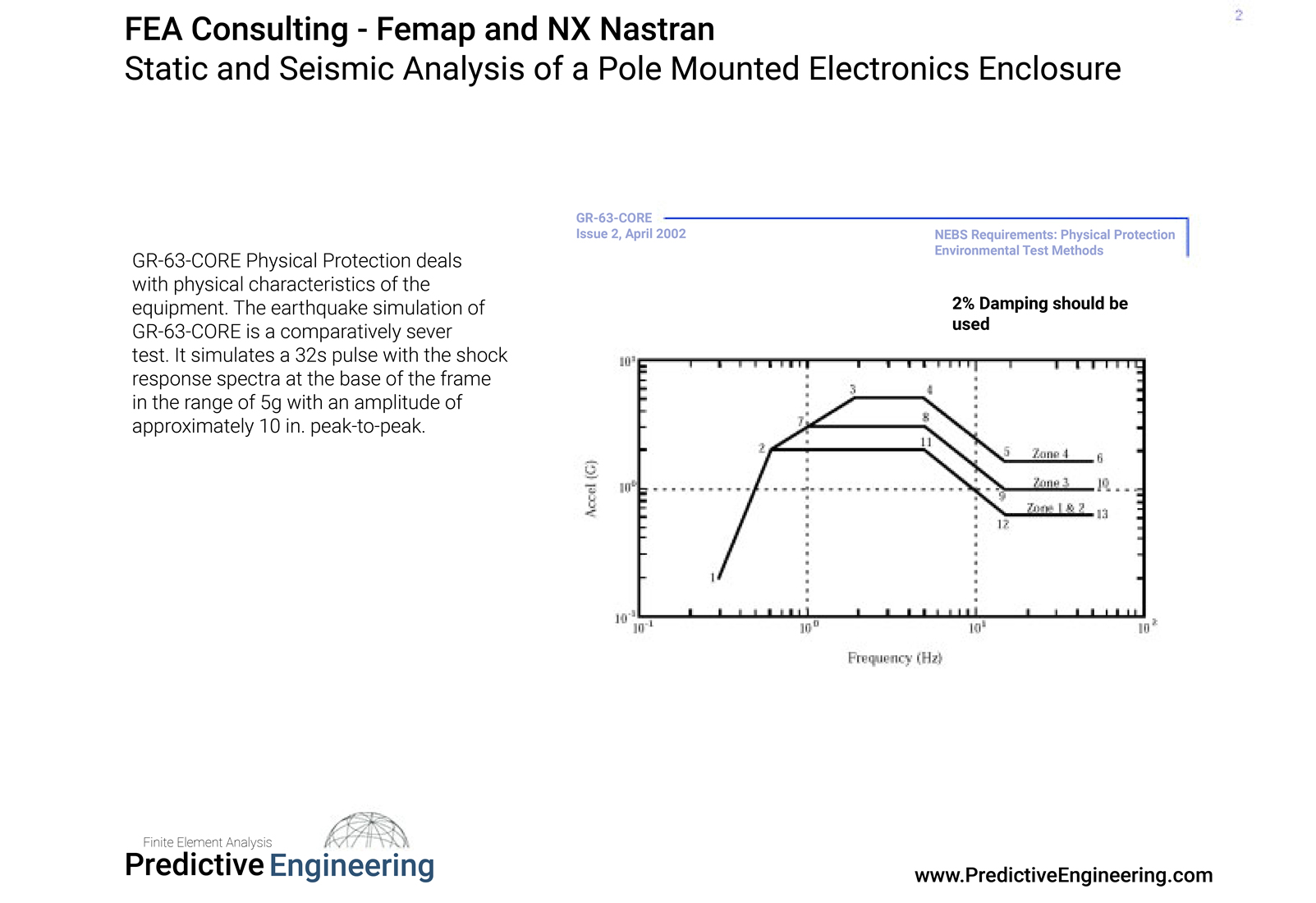 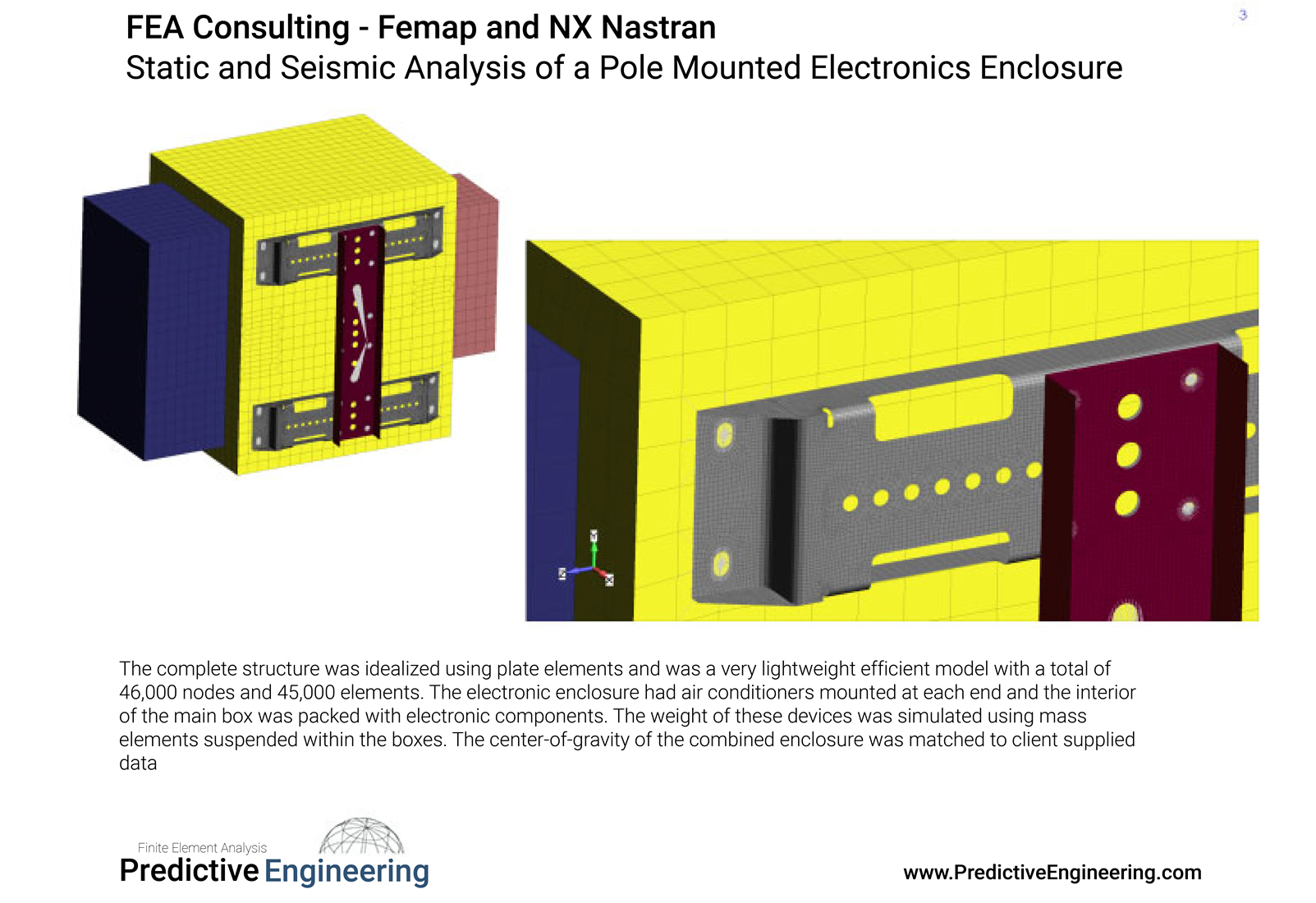 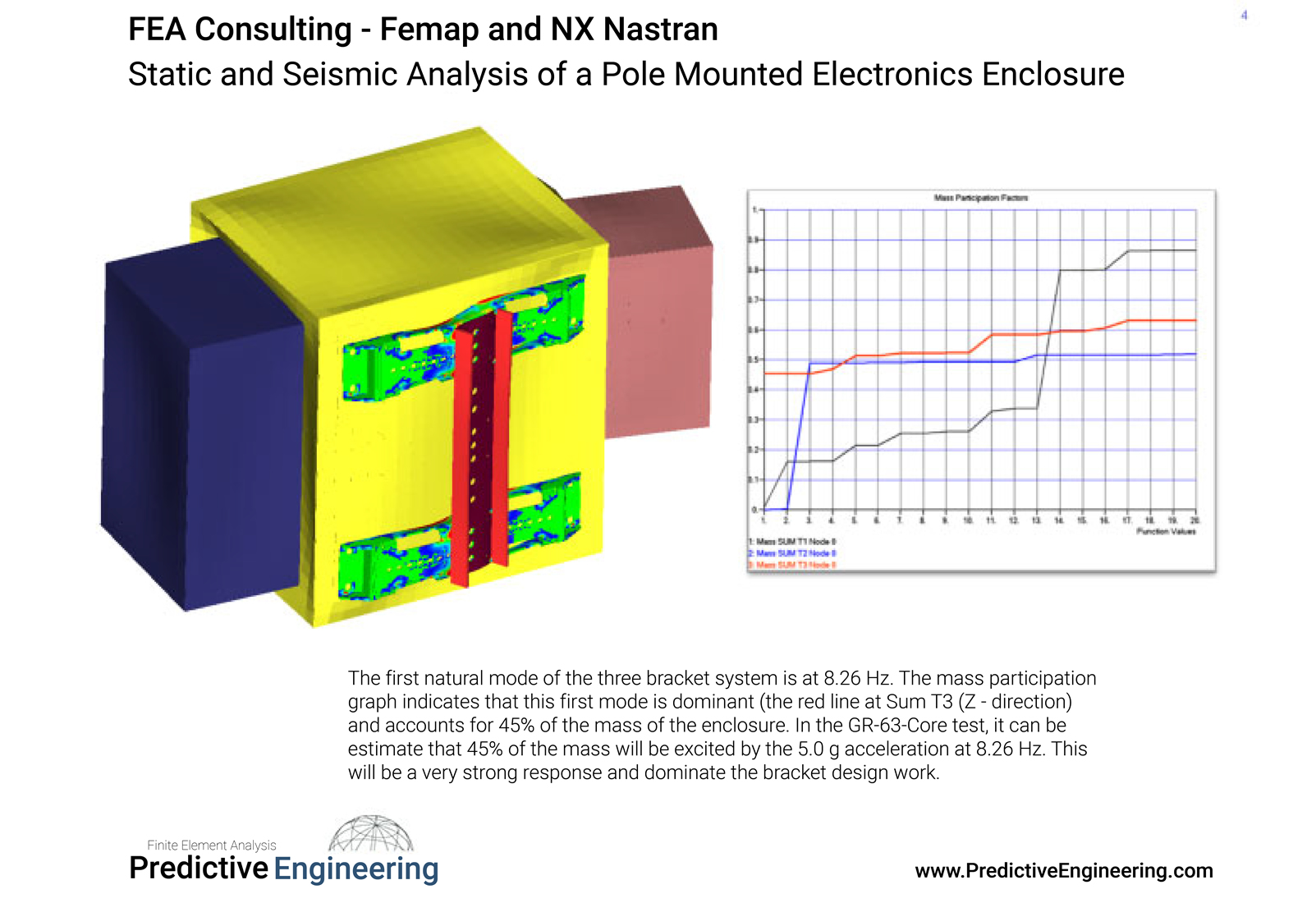 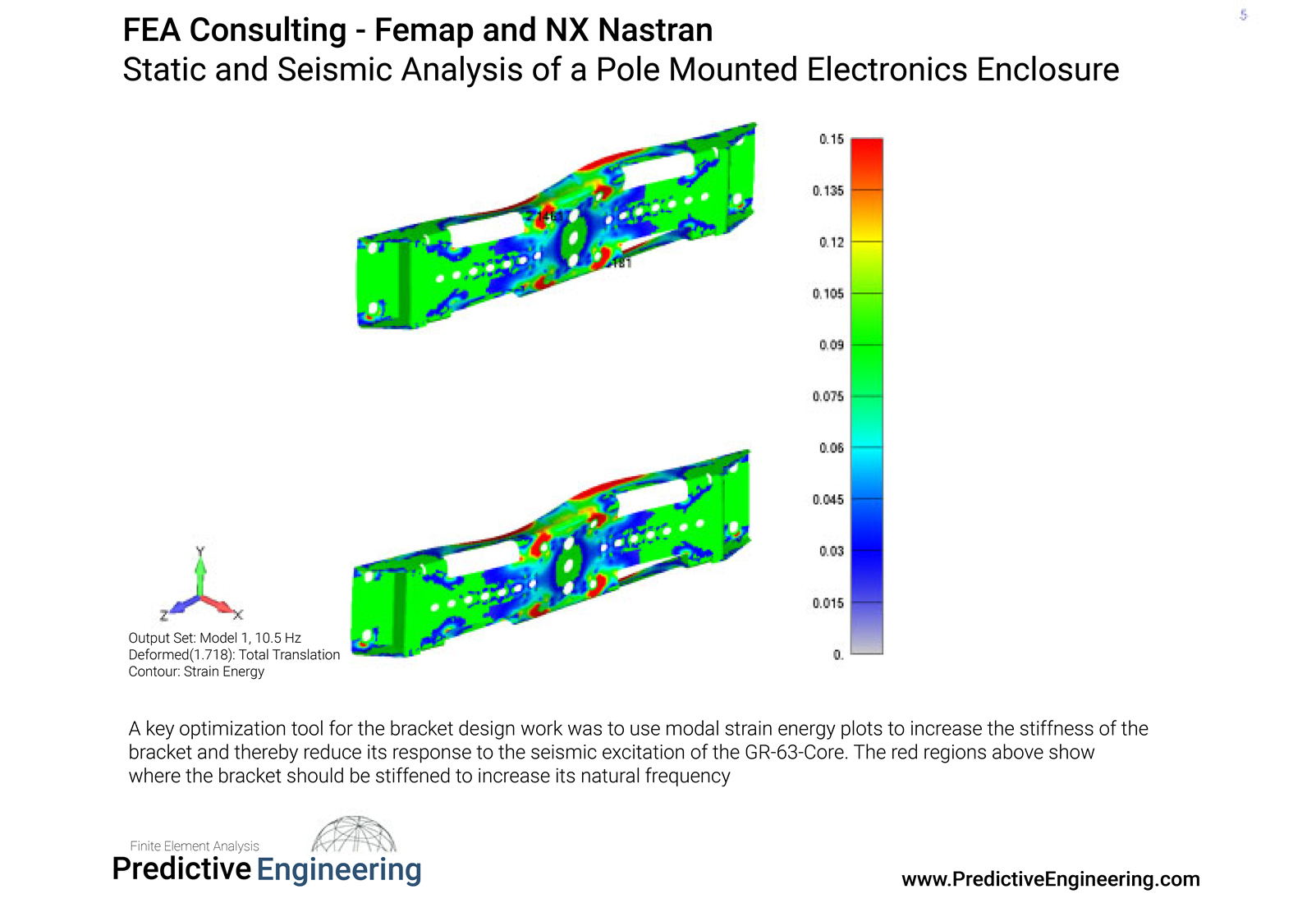 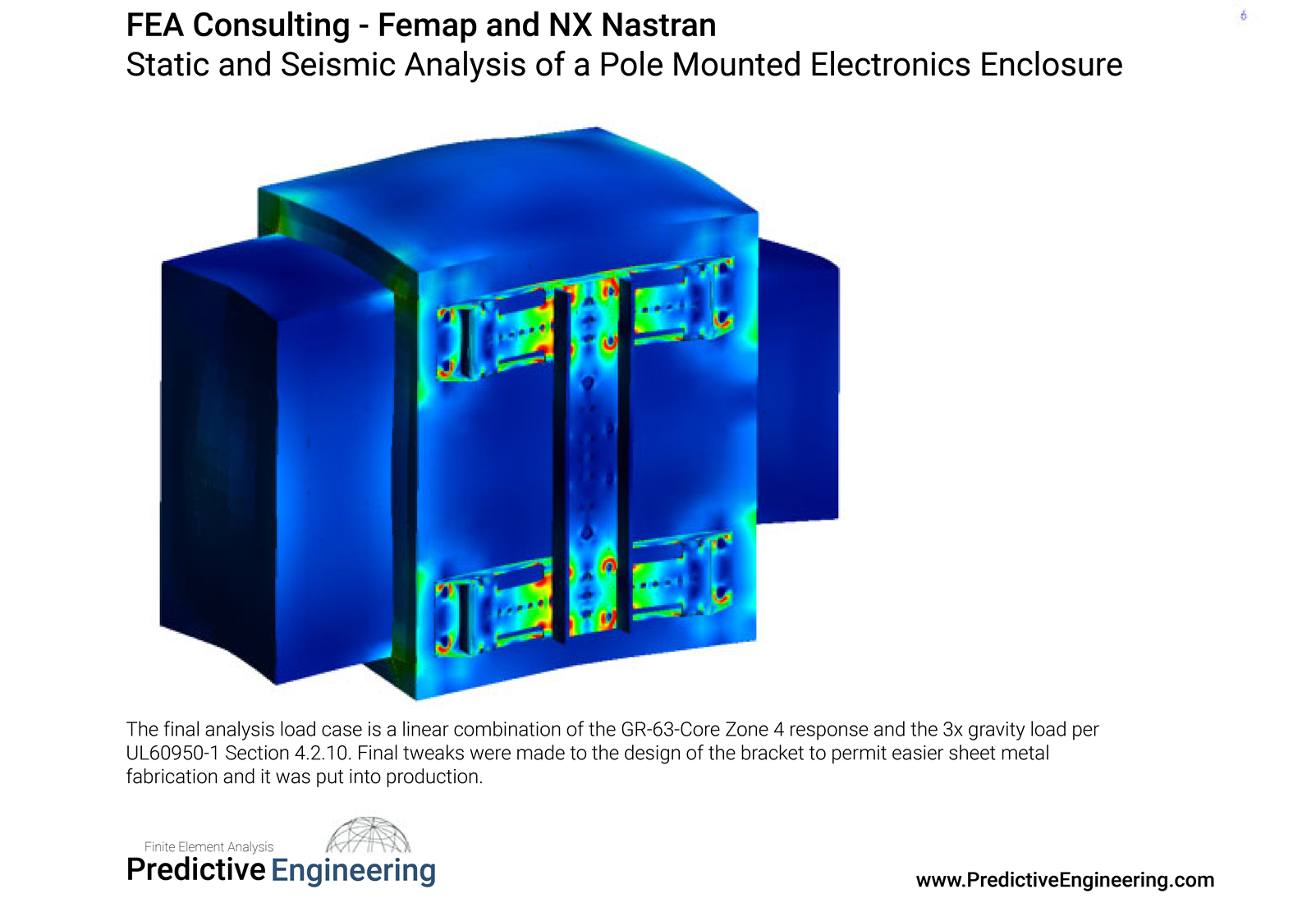