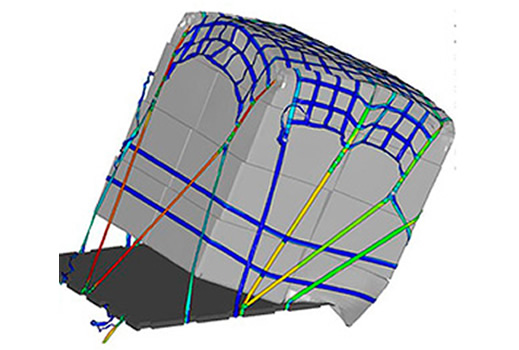 Cargo nets are rather mundane industrial things. We see cargo nets in the back of pickup trucks, tying down cargo on large trucks and, if we are passing by a military airport where cargo is being transported, cargo nets are everywhere there is a shipping pallet. This nonlinear FEA consulting project was done for a major manufacturer of military cargo nets. They needed to verify that a new, more economical nylon strap design would still delivery the same performance as an older design.

In the military world, aircraft often carry both cargo and personnel and the last thing that one wants is for the cargo net to break and have cargo flying around inside the aircraft during a severe landing event (that is to say during a crash landing). To ensure against this possibility, we have a test requirement that the cargo net must withstand a 8g deceleration with a 10,000 lbf cargo load. Experimentally, a go / no go result can be obtained by impacting the cargo net system (pallet, cargo and net) at a fixed velocity against a rigid wall (think crash testing of automobiles). The downside to this approach is the lack of good engineering information about the mechanical behavior of the straps.

To design the “better cargo net” – we created a cargo net system finite element model using Femap from Siemens PLM Software. The model construction was very easy whereas getting the simulation to run correctly was a battle.  The primary challenge was to capture the contact behavior between the nylon straps, steel rings and hooks and the semi-elastic/plastic cargo boxes. Huge variations in the materials' stiffeness and then the desire to use mass scaling  to speed up the solution required very careful model setup.  Pilot models were constructed to evaluate different contact algorithms.  This is the beauty of LS-DYNA -- it was built from the ground up to solve the world's most difficult contact problems (according to Paul Du Bois) and using a few tricks provided by LSTC's tech support group - the model was correctly capturing the various contact behaviors between the steel rings, hooks and nylon webbing. Additionally, nylon straps are basically membrane type structures but they do have some bending strength. Getting this behavior modeling correctly required the use of an overlay technique within LS-DYNA of membrane plates on one layer and then another layer of fully integrated plates meshed over the same nodal locations.  After many tweaks and lots of support from the LSTC support staff, the model started would quickly run to completion in a couple of hours.

Analysis results were compared against experimental data and…almost somewhat unbelievably…good correlation was found. In fact, it was determined that the experimental test  results were not that accurate and that the test was being performed under some false assumptions. As I am fond of saying…the model is always right it is just a matter of understanding of what the model is telling you!

To see the LS-DYNA cargo net simulation and a few others, please take a look at our YouTube playlist. 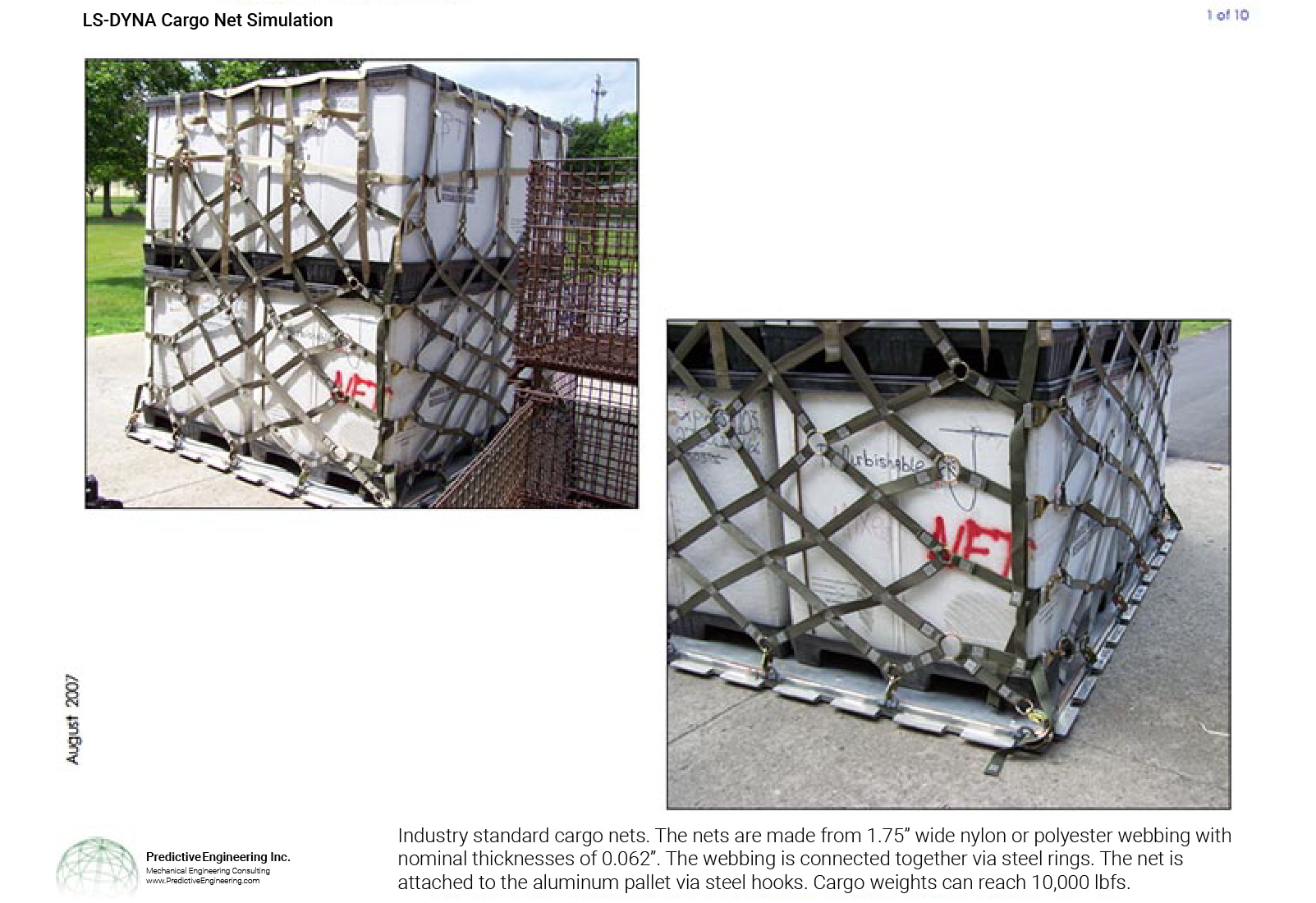 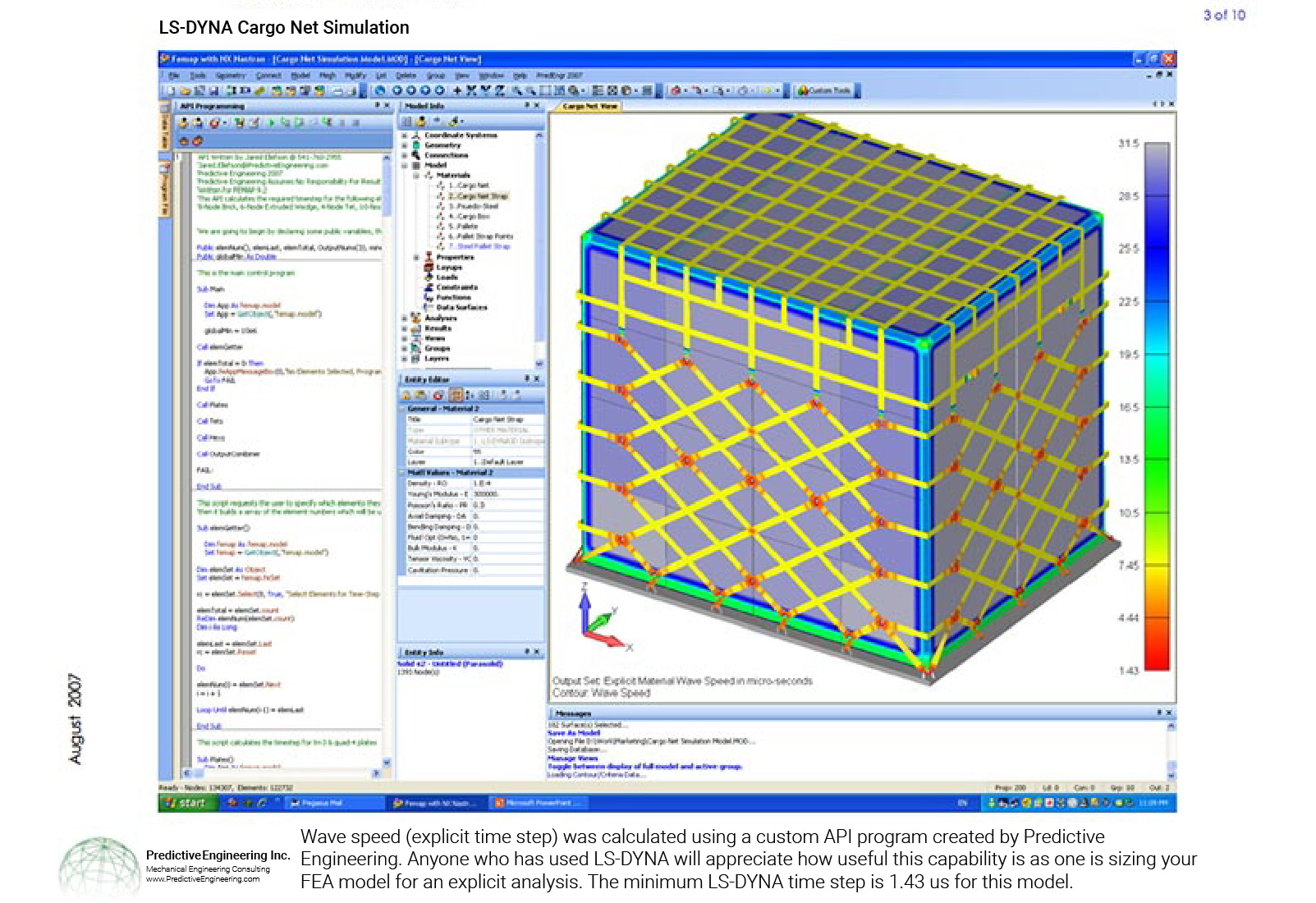 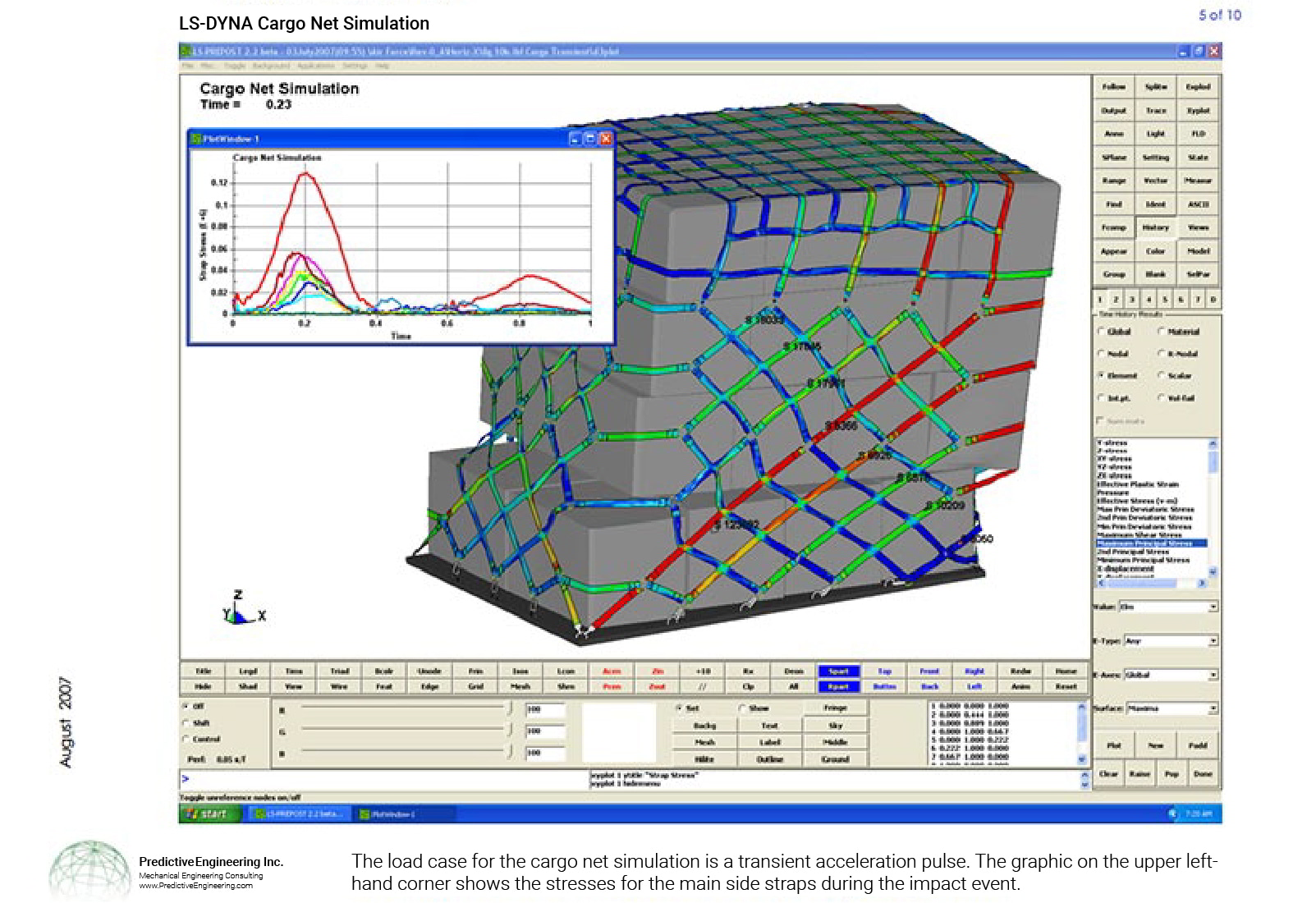 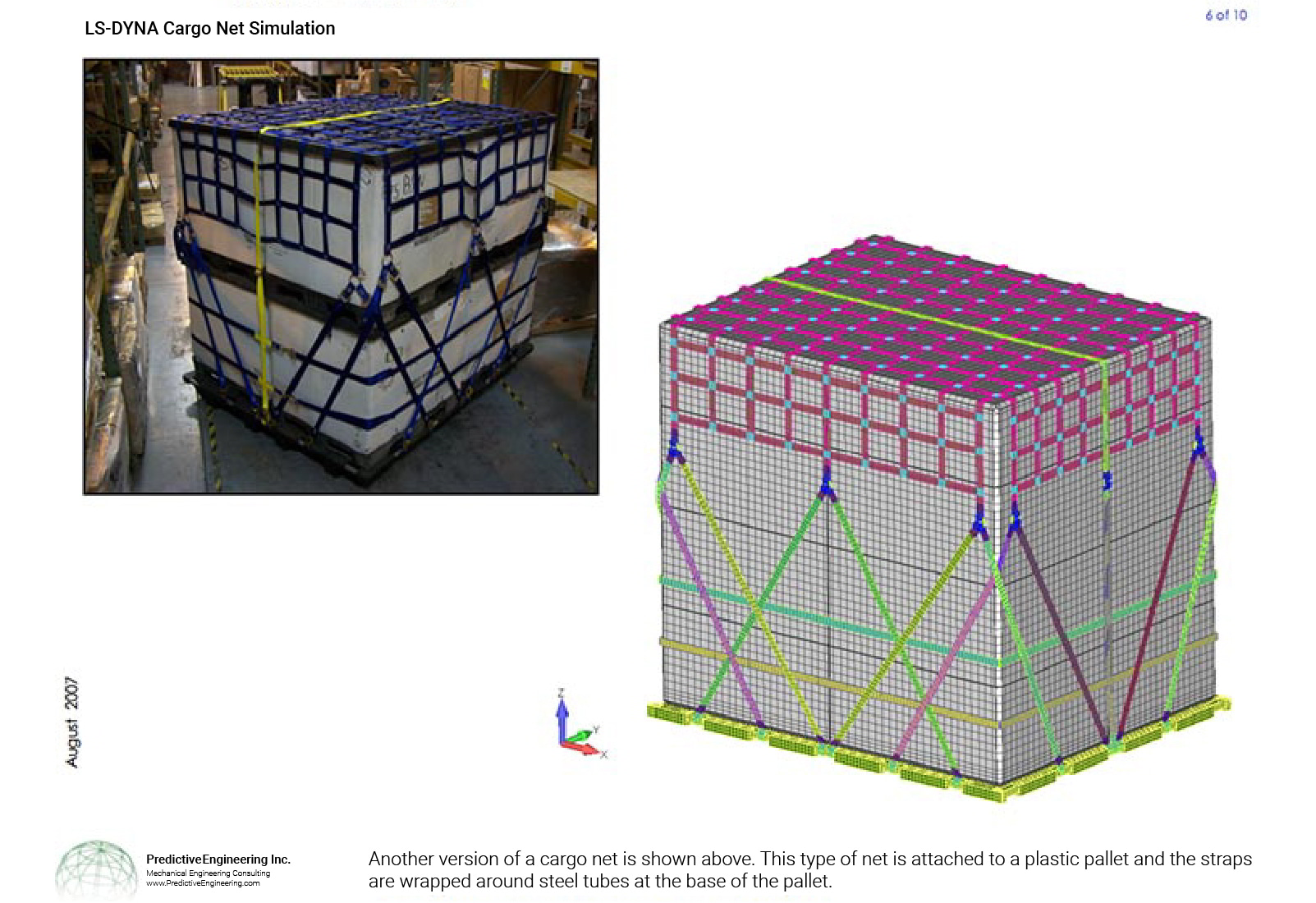 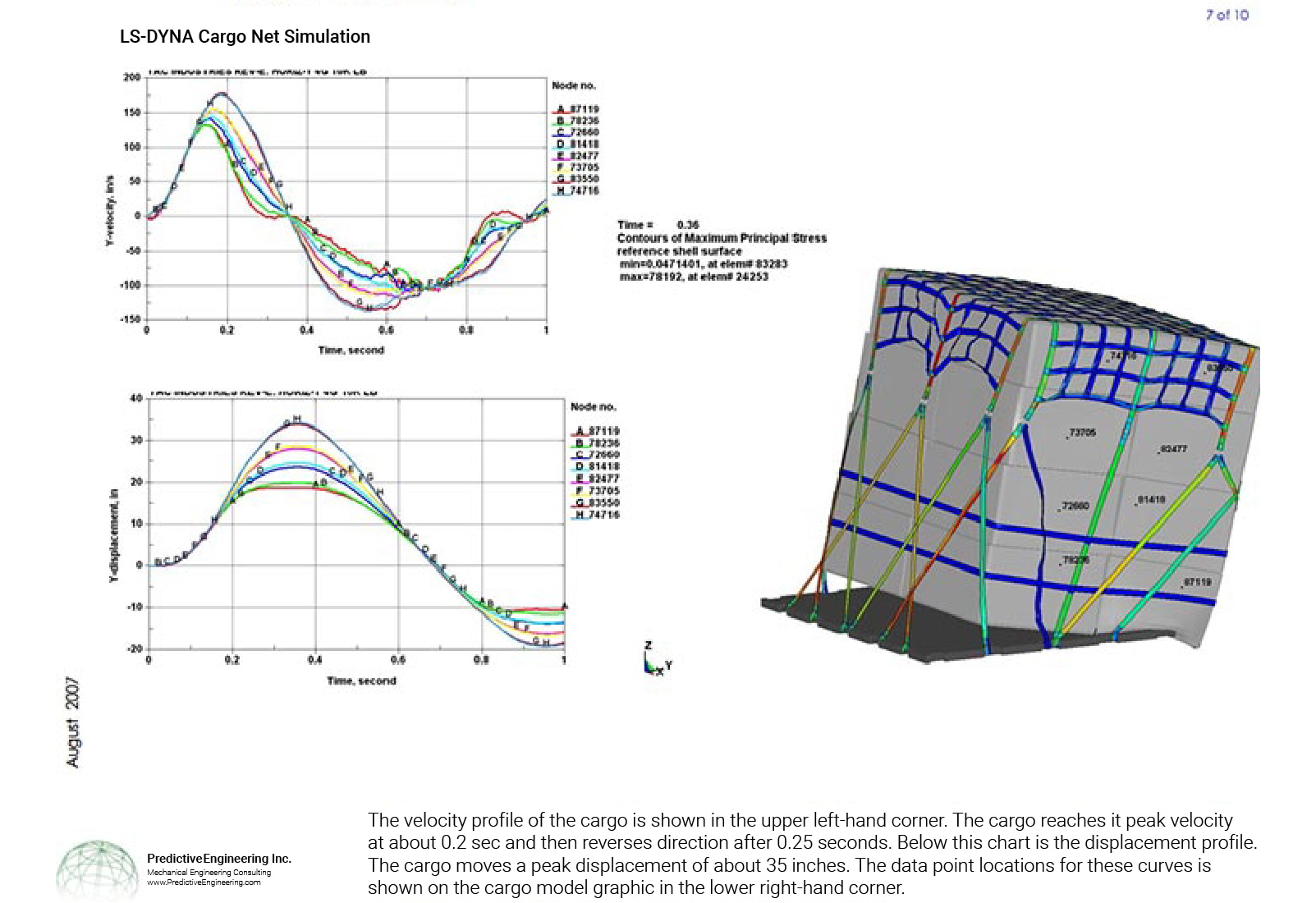 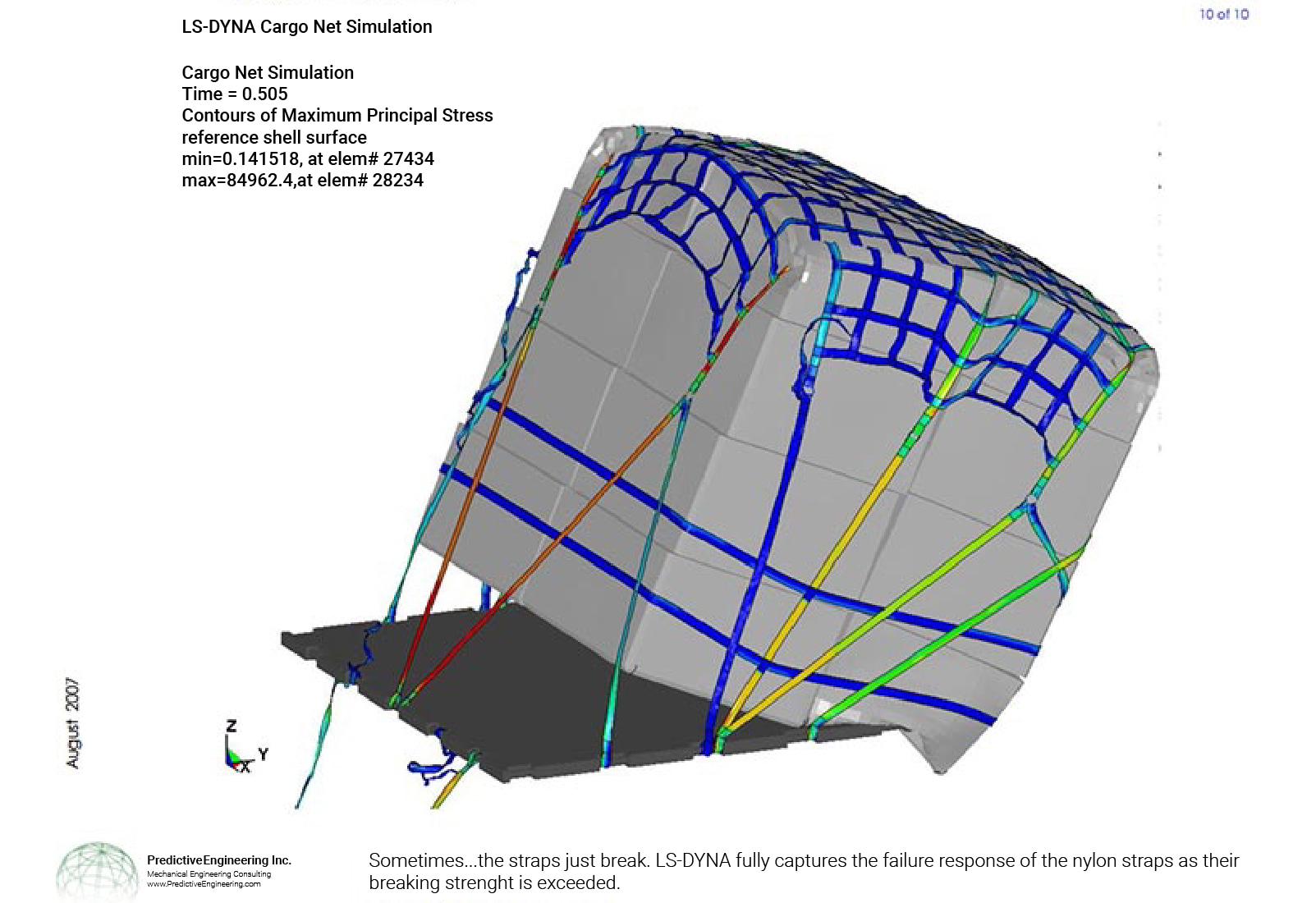