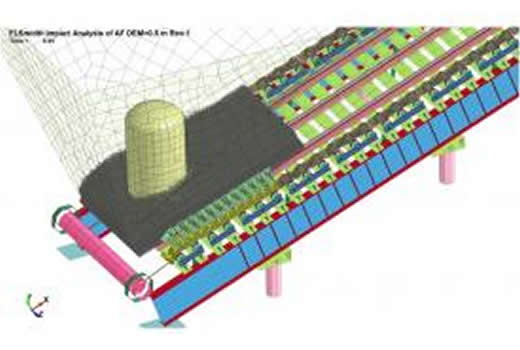 DEM and SPH are both visualized as small discrete spheres but that is about all they have in common since DEM is often used for modeling discrete particles such as rocks or pea pods while SPH is used for modeling continua such as fluids and solids. Where we have found DEM and SPH useful is as a method to apply dynamic loads to structures. For DEM simulations, the ability to simulate granular media from sand and rocks or to friable compressed mineral cake or to food products, has allowed us to create FEA simulations that are far more accurate than what can be achieved by any combination of time varying force, acceleration or pressure loading arrangement. With SPH and its ability to simulate the mechanical response of highly deformable media (e.g., hail or frozen birds) during impact or fluids sloshing within a tank with good accuracy and low numerical cost provides a ready means for performing bird strike analyses or hail impact analyses or fluid sloshing analyses.

This case study is provided as a standalone document but is best accompanied by the video we have posted on YouTube which provides an overview of the DEM and SPH process and some examples of how we have used it at Predictive Engineering.

The video provides a graphical overview of the DEM and SPH process that has been used at Predictive Engineering with examples of project work with direct examples of:

DEM particles
DEM particles were used to simulate the processed mineral cake onto conveyer belt feeder with a knife gate at the far end. The model was built in Femap and then exported to LSPP for the addition of the DEM elements.

The SPH bird disintegrates upon impact with the radome