Tell Us What We Don't Know - FEA'ing the Unknowns

I was stumped the other day when a client asked me “How can your FEA results help us design better QA experiments?”  I had no easy answer, and it was a bit disheartening.  After the meeting (isn’t that always the case?), I realized that we did have many examples of how FEA results allowed our clients to develop better test methods, that they were just sort of hidden away under other names.  So let’s pull out three examples and give a quick tour.

QA Can Sometimes Not Be About “Quality”

A medical device manufacturer came to us with a quality control problem.  Their endoscopic surgical anvils were frequently breaking upon use, leaving the tip of the anvil within the patient.  The anvil was the business end of the device that would form the titanium staple around the vein and close it shut.  Failure of the stapling operation was not a good outcome.  Our client had all the standard quality assurance (QA) procedures in place and tested each anvil by hanging a 40 lbf load from its tip.  When we applied the 40 lbf load to the FEA model, we found that the stresses were around 150,000 psi far exceeded the yield stress of the sintered stainless steel at 100,000 psi.  After much debate, the QA department went back and did some experiments and determined that the surgical stapling load was 14 lbf.  Thus they changed their QA procedure to use a load of 20 lbf.  With this lower load, the QA department was no longer pre-cracking the anvils prior to shipment and the problem went away.  The solution?  Once they knew that their QA load was excessive, it encouraged them to determine the true load requirement and modify their QA procedures.  A bit of humble pie but very tasty at the end of the day.

When Everyone Says That Your Model Is Wrong

Our client was developing a small military satellite receive that could fit within a backpack.  The idea was that troops in the field could watch sporting events and I’m not making this up.  Given field requirements, it had to thru the standard MIL-STD-810E for drop-testing.  We were brought in after they had already done some drop-testing and had some breakage.  To keep our simulations true, we asked not to be told what and where things had broken.  We developed the model and noticed a few regions where failure was probable but in one component, a die-cast magnesium housing, the calculations showed a clean stress pattern with stresses well under the material margin.  As you can guess, that was the component that was breaking during the drop-test.  The meetings were intense with representatives from the military and our client interrogating the model and questioning our assumptions.  After checking and double-checking, the only possible explanation was that the die-cast magnesium part was defective.  We requested that the client have the part metallurgically examined for defects.  The metallurgist’s report came back and indicated that the die casting was poorly manufactured and had extensive defects.  The part was replaced, and subsequent drop-test results aligned with our model’s predictions.

Test Data is Not Always Your Friend

This was supposed to be easy.  Get some test data on foam compaction, build the model, correlate to test and explore new designs.  Naturally it was a head-banger.  The testing laboratory data was nearly perfect, and our test model matched up like a skin-tight glove.  Then we did the reverse engineering trick where we tried to match the model to our client’s experimental hammer test.  It was a disaster.  There was no way we could get close.  Our model was consistently low by about 500%.  Just crazy low.  What we determined is that our client was impacting the foam multiple times and then averaging the data.  One can see this in the data table shown in the figure as the Peak Force goes up after each impact.  What was happening was that the foam was being destroyed and compacted into a solid plastic brick after multiple impacts.  Once we threw out all subsequent impact data and only used the first hit, our model aligned within 5%, which in FEA terms, is almost perfect.  This was another lesson about the importance of understanding the test and also materials science.  Since, as we know, the model always gives the right answer to the right question. 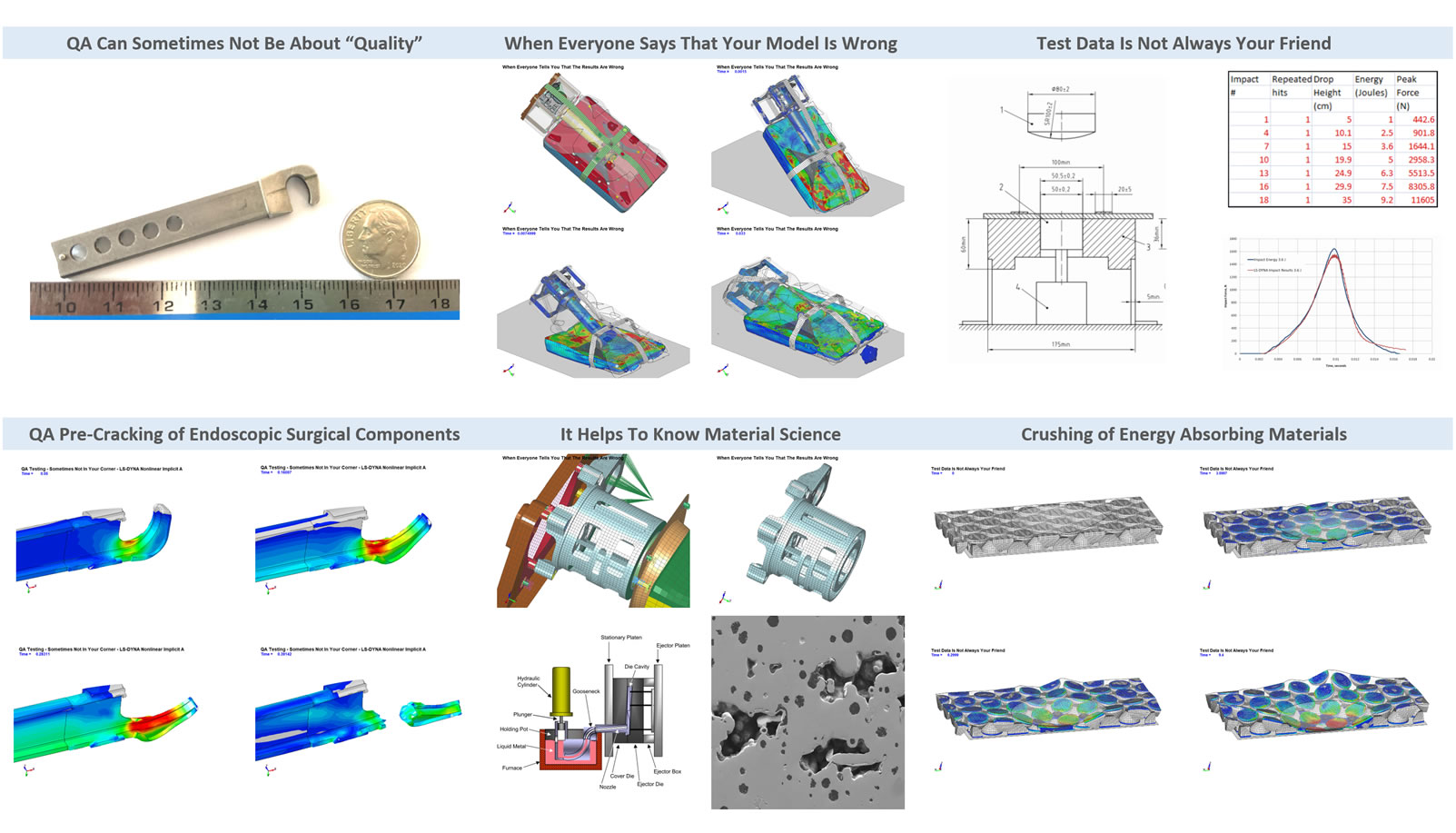